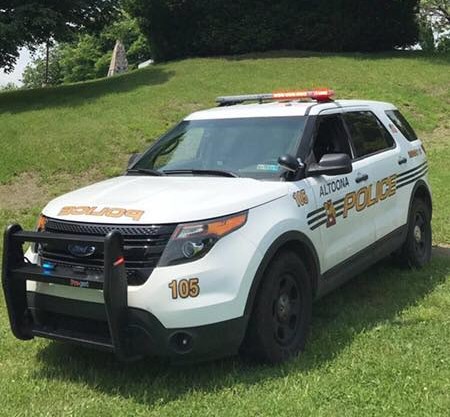 Last night at 1:00AM Altoona Police say a black male with a gun attempted to rob Ajay’s Bar, 2901 Maple Ave.

Authorities say the bartender who is a retired Marine Corp combat veteran was able to disarm the suspect as he was handing him money from the cash register. A struggle ensued between the suspect and bartender when a round was discharged from the firearm, missing both the suspect and bartender. The suspect is believed to have obvious facial injuries from being struck with the firearm during the struggle. The suspect was able to get away by exiting a side door and fled on foot city northbound across Maple Ave. Officers followed a blood trail which ended in the back yard of 2902 Maple Ave. The bartender was not injured.

Police describe the suspect as a black male, approximately  5’07, 180 lbs, last seen wearing a a blue winter jacket, blue winter hat, jeans, a gray/red plaid scarf covering most of his face, and possibly an afro style hair cut. It is strongly believed that he has obvious injuries to his face/head area.

Police say the firearm was recovered on scene, which was reported stolen in the city several months ago. Officers are currently processing evidence and obtaining surveillance footage from inside the bar