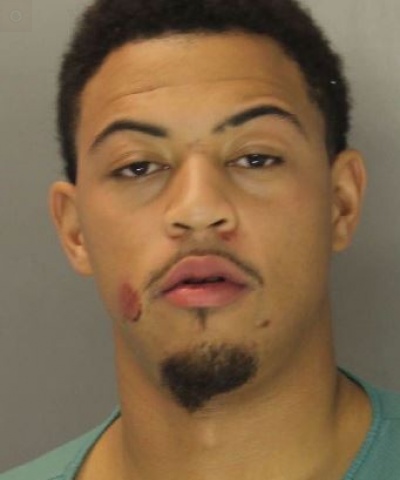 On Sunday, December 30, 2018 at 1:50AM  the Susquehanna Township Police Department was dispatched the area of the 1400 block of Wandering Way, Harrisburg PA for reports of a gunshot.

Officers say they located a domestic assault taking place at a home in the area.  According to police the victim was in the driveway as the suspect, Karriem Parker took a handgun out of his pocket and shot one round into the air because the victim would not allow him in the house. Police say the victim was able to flee and enter the house  and Parker then began banging on the doors to the house trying to get in.  Officers say eventually he made entry into the house through a garage door.

Upon the arrival of the police, the occupants were able to safely flee from the house.  According to police Parker was still inside and eventually surrendered to officers, was arrested and taken into custody.

Parker was transported to the hospital for a medical clearance as police say he had injuries from a previous fight and injuries from damaging property during the domestic.  After his release from the hospital, he was transported to the Dauphin County Booking Center for processing and arraignment. Parker was charged with Burglary, Persons not to Possess a Firearm, Carrying a Firearms without a License, Simple Assault, Recklessly Endangering Another Person, Criminal Mischief, Tampering with Evidence and Disorderly Conduct.  He is currently in Dauphin County Prison on $50,000 straight bail.

Police say the handgun used in the crime, along with the expended round were recovered at the scene.

The 23 year old Parker was arrested in April 2015 for a number of charges later pleading to Criminal Mischief-Tamper W/Property and Resisting Arrest for which he received a sentence of 12 to 24 months and 90 days probation.

Later that year in September Parker was charged with 25 counts including Possession Of Firearm Prohibited, Firearms Not To Be Carried W/O License , Terroristic Threats W/ Int To Terrorize Another, and Simple Assault. In that case all but one of those charges were dropped with Parker pleading guilty to Recklessly Endangering Another Person for which he was sentenced to 12-24 months made concurrent with the earlier case.